Keep up with Sales, New Products and other events at Scrap `n Stamp. Sign up for our newsletter now! 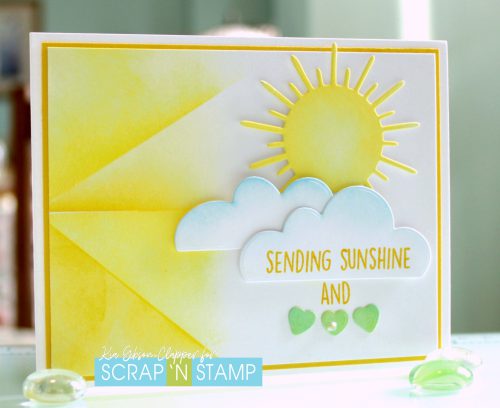 Hello all, Kia here with you today to introduce you to “Sunshine Thoughts”. This is a thank you card, the thank you has been done on the inside.

But first, the front of my card. I am using distress inks in Squeezed Lemonade, Mustard Seed and Tumbled Glass for this card.

To start I taped off the left side of my card and blended on the Squeezed Lemonade and Mustard Seed alternating between the two colours. I then die cut the sun, clouds and hearts from the Rainbow Dreams honey cuts set. 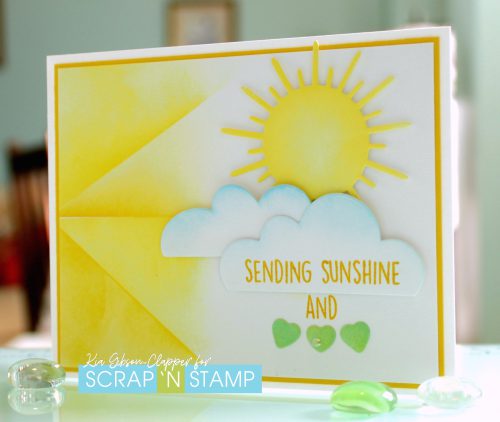 On one of the clouds I stamped the sentiment using distress ink in Mustard Seed. I then stamped the “and” below where the cloud would be and attached the green hearts using Nuvo adhesive. 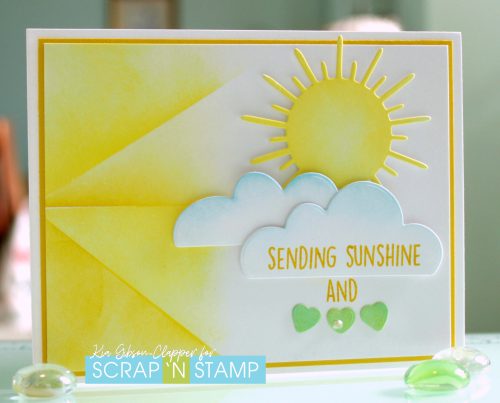 I arranged the pieces then attached them using foam squares. To the middle heart I added a crystal gem.

On the inside of the card I used the Bitty Buzzword stamps and dies, keeping to the colours from the front.

Thank you for joining me today. I hope you have enjoyed today’s card, Sunshine Thoughts. Following are links for the products which can be found in the Scrap’n Stamp store. 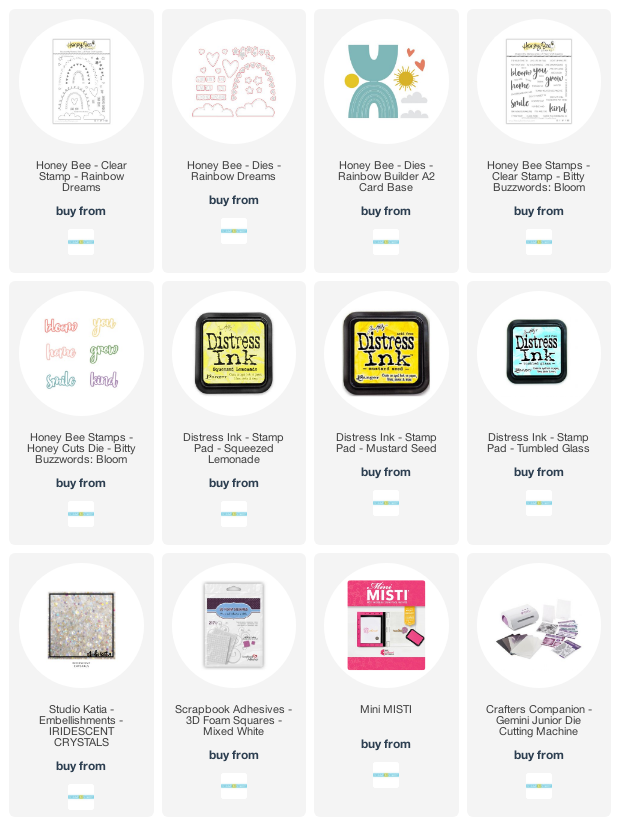 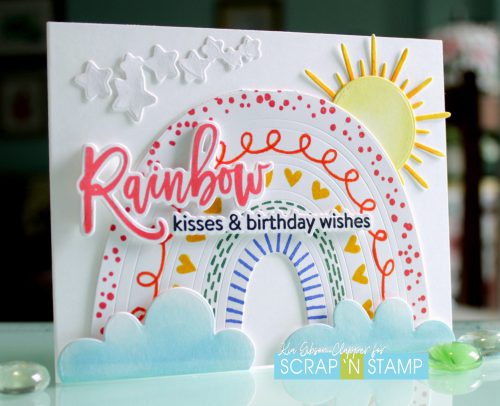 Hello all! Kia here with you today to share this card for the Random Act of Cardness “Rainbows”. Lately I have become addicted to Honey Bee stamps and dies, and this set is one of those sets I just had to have.

Below I will attach a list of the stamps and dies that I used for this project, as there are quite a few. The first thing I did was die cut the Rainbow Builder A2 card, then proceeded to stamp the pieces from the Rainbow Dreams set, where I used colours of the rainbow distress inks.

I then die cut the balance of the pieces, being the 2 piece sun set, the “Rainbow” sentiment along with the line sentiment and the clouds. 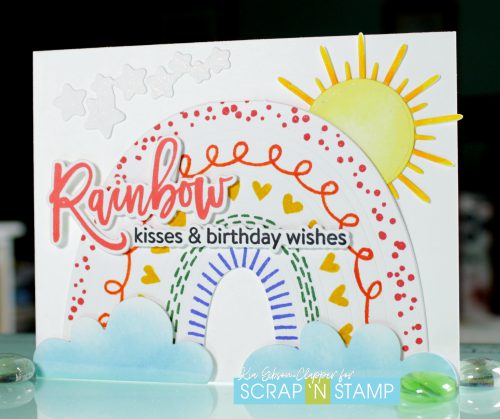 I used Copic markers on the suns rays, and on the top piece of the sun I used Squeezed Lemonade distress ink. I then attached the sun along with the Rainbow to my card base gluing them in place with Nuvo adhesive. I left the Rainbow in the thickness of the Hammermill cardstock, as it adds dimension to the card.

In my Misti I stamped the “Rainbow” and the sentiment sentence using VersaFine Clair ink in Tulip, and in Nocturne. For the clouds I brushed on distress oxide ink in Tumbled Glass, and attached the clouds to the card using foam strips.

I then added the sentiment pieces, again using foam strips. For the finishing I die cut the stars from white card and glued them to the card base using Nuvo adhesive. 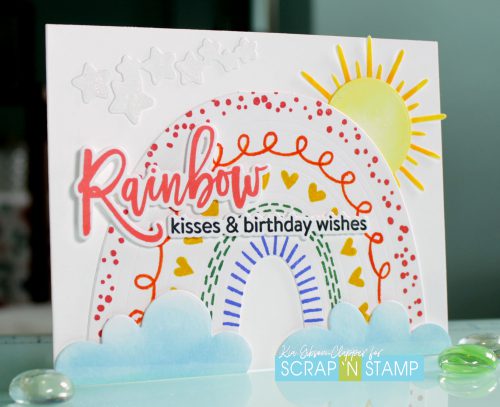 I added Nuvo Midas Touch to the Stars, and Nuvo Aqua Shimmer Pen to the Clouds for a bit of sparkle. I wish it would show up better as it is very pretty.

Thank you for joining me today. Following are Affiliate links to Scrap’n Stamp at no extra cost to you. You can find USA links on my blog. 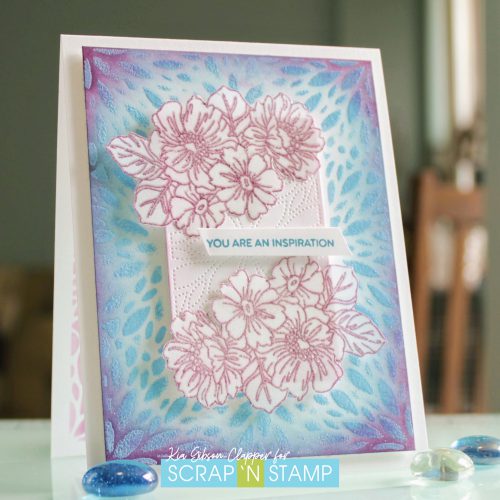 Hello all! Kia back with you today to share my card for day 25 of the Random Act of Cardness series. Today’s prompt word is “Flowers”.

I have used flowers by Honey Bee Stamps, which I stamped on vellum using Seedless Preserves distress ink. My background is done using a Paper Rose die to cut a piece which I used as a stencil, adding embossing ink, then heat embossing with Broken China distress ink. 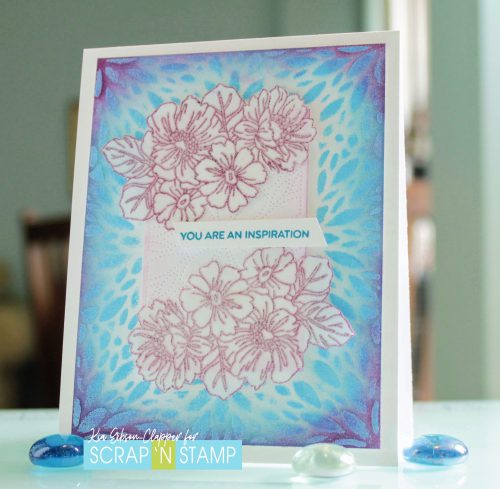 When the heat embossing was finished I added distress ink in Seedless Preservcs around the edges of the heat embossed panel and attached it to my card base using foam tape.

I then inked up the centre die piece using the left over ink from my distress ink Seedless Preserves brush and attached the piece to the card using foam strips. To the back of the blooms I added vellum tape from my EZ runner. 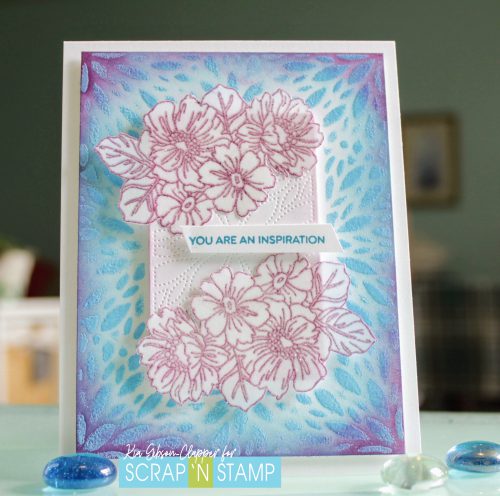 To finish my card I stamped the sentiment using VersaFine Clair ink, trimmed it and added to the card again using foam strips.

Thanks so much for joining me today. Following are Affiliate links for the products I used for this card, at no extra expense to you. 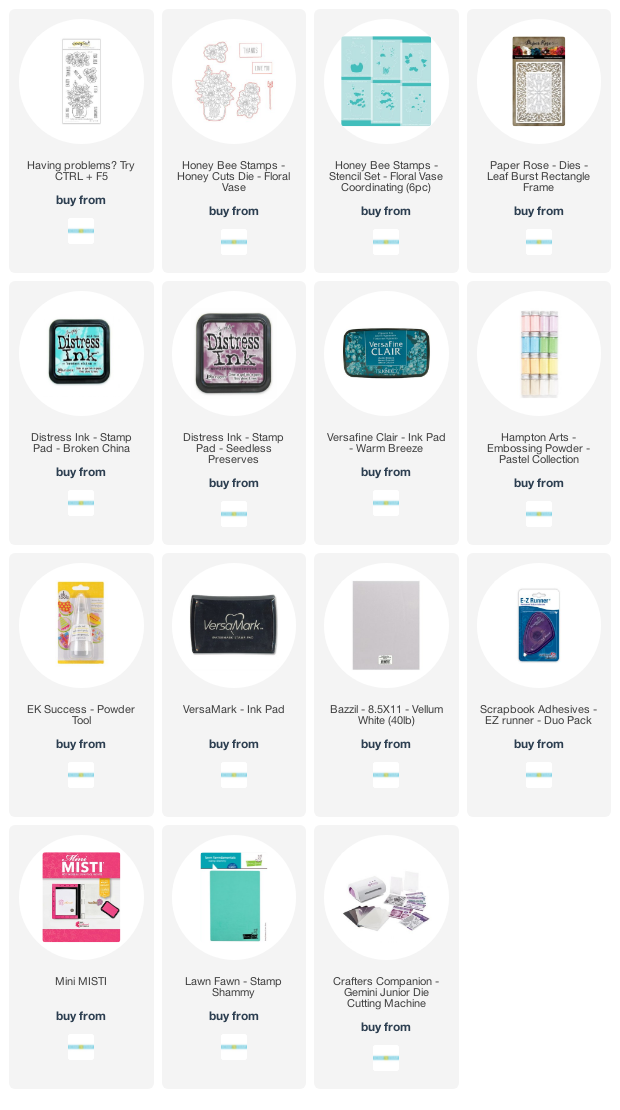